I haven’t had much luck with

random contests. So when I won a pair of concert tickets in a CBC Radio Twitter contest recently I was ridiculously thrilled. The tickets were for an intimate show by Canadian folksters Great Lake Swimmers at the Glenn Gould Studio in Toronto. Not just any show, either, but their new album “New Wild Everywhere” played from start to finish (with two or three interludes of older songs).

It was an incredible evening. A diverse ensemble of musicians–including a full string section–playing on a stage lit by spare, ethereal backdrops. And lead singer Tony Dekker engaged the audience graciously, repeatedly thanking us as if our being there was the big gift.

I had seen the band before, a few years ago at a local pub in Hamilton. This concert, however, was set apart by the unfamiliari 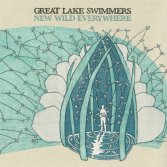 ty of the songs. Actually, that set it apart from all of my earlier concert experiences. There were no lyrics or melodies already in my head, no favourites to hope for. I couldn’t be anxious about a live track matching up to a beloved album arrangement. Everything was fresh, free from specific anticipation.

I found myself half-finishing unknown lyric lines in my head. But the real lyrics were far more beautiful and unique than my guesswork. (And their poetic quality is even clearer to me now, as I’ve had opportunity to buy the album and play it repeatedly.)

Mercifully, the entire show was recorded by CBC Radio, so those present can relive it and other fans can also enjoy it (in video and audio).

There’s not much else to say about this lovely album besides: go buy it. But I’ll end on my recently published review of the album–a small attempt to pay tribute to its goodness:

Great Lake Swimmers has a tradition of recording folk harmonies in odd and isolated Canadian locations such as a lakeside church or an island. Their fifth album, New Wild Everywhere, emerged from the studio, yet the earthy beauty of their music holds. Its lyrics are rich in physical imagery: rock, wind, forest, and sea. Tony Dekker’s gentle vocals blend naturally with guitars and multiple violins. It seems this band can make new, wild, graceful music anywhere. The upbeat “Easy Come, Easy Go” stands out as the catchiest track, but even their hushed melodies will hook you.

3 thoughts on “Fresh folk-rock from a great band”

I'm a writer and editor living in the lovely city of Hamilton, Ontario. By day, I write for World Renew, a relief and development agency; during evenings and weekends, I let short stories, essays, and other pieces out to play. I like to write about the intersection of faith, art, culture, and justice.